Jane, Rotimi, Samia and Selina from the SHAKE! collective took a day trip to Leeds yesterday to meet up with Khadijah and Simon, facilitators from Leeds Young Authors and Stuart, a researcher from the University of Leeds MA in Activism & Social Change. The meeting was planned to lay down the groundwork for the “Britain on Trial” arts and activism event that will take place on October 29th as part of the ESRC’s Festival of Social Science. 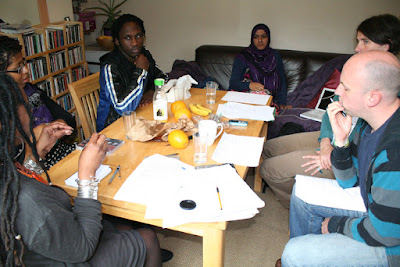 This event, which will take place in Leeds, will use the Stephen Lawrence re-trial as a starting point to ask,  “where are we now” through a day of workshops and an evening of performances to expose Britain’s countless injustices. Exploring themes such as identity, justice and race through creative workshops, 10 minute speed-lectures and evening speakers, the day will aim to inspire the young people involved in the day to think honestly about themselves and the country they live in today. Britain on Trial, an initiative created by SHAKER Selina, aims to question unjust aspects of British society through creative mediums such as poetry, illustration, photography, short film and essays. The idea to use this as the umbrella theme for the event came organically with a view to unite the various disciplines of the group and the discussions that will take place in the day.

It was a great first meeting that allowed us to get to know each other better and we are looking forward to the planning that will follow. Big thank you to Simon for lending us his house, beautiful garden and making homemade bread – beats a stuffy boardroom any day! No thanks to the pompous man on the train who told us to be quiet in the middle of a full-on discussion about race, empire, language, identity and culture. He could have joined in, eh?
Watch this space for more updates on the Britain on Trial event! Also, check out the Britain on Trial website to find out more and get involved in Selina’s project: http://britainontrial.wordpress.com/