Art of Nature – by Grainne and Orla

As part of Shake! continuity Orla and Grainne attended a training weekend on the art of nature. Here are some of their reflections on the weekend.

Below are some of the highlights of the weekend and projects you might be interested in:
Shelly Sacks had given a talk about “The university of the trees”. This encouraged the use of alternative thinking such as using intuition and experiential learning to bring people together to discuss ideas and question our concepts of knowledge. After the talks there was time to split into groups and discuss issues further or to go outside and practice the ‘University of the Trees’ concepts. We were given free reign to how we did this.  so she proposed to the group that she was going to have a wander outside to find a tree and welcomed members of the group to join her as a place to discuss and think about some questions. As It was a sunny day and I was getting tired sitting indoors I joined her groups:
The questions:


Some of us stayed behind in the meeting room where we transformed the space into an interactive sculpture using the chairs and paper. 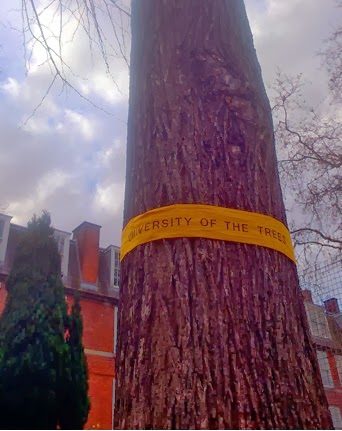 The tree our group chose, in a playground, just outside Greenpeace HQ. The tree had two basketballs lodged in its stumpy branches, had been chopped back quite a bit, but still stood tall through the close approaching tarmac.

It was an interesting experience going out together to find a tree, once we had found a tree and put the banner around it we all felt a different connection to the space and each other. Passers-by also stopped for discussion. We all noted how we noticed the other trees nearby from the space a lot more now and felt better connected to the nature in the area. When asked how I felt I mentioned that in a forest the trees act as a network, helping each other out and I had heard that if a tree becomes weak the other trees help it out through their connections to each other and build it back up through the forest network. This relates to everyday life, and the tarmac and the fences around this tree are disconnecting it from the other trees and sometimes we can become disconnected form each other in built up areas too. The stronger connections we have with each other the stronger we become, and we can learn form nature that way. When we came back into the building and into the room with everyone else, 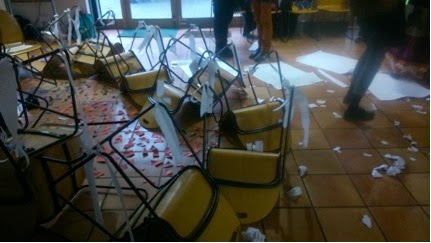 it seems artists don’t like being kept sitting on chairs for too long! it drives them a bit crazy! – Some of the group had responded with an art installation involving all the chairs in the room and ripping up sheets of paper! It certainly ended the day on and ice-breaker ready for the next day! 🙂

Clive Owen- Soil Culture
Clive’s talk was very useful! I (Grainne) am working with an not-for-profit community interest group LESS in Lancaster at the moment on a game they have got funding to develop /which is a social, experimental game that aims to get people engaging more with their environment, each other, and thinking about their everyday choices in a playful, yet eco/ethically minded way.In Clive’s talk he spoke about a project “Games people Play” which was a series of activities and exhibitions put on by ‘Soil Culture’ and ‘The Centre for Contemporary Art and the Natural World’. He said how “Games can tell us a great deal about human nature” He gave some great examples of games that are all ready out there that get us to question our everyday choices and ethics:
·     PaulaOwen– Eco action trumps
·     Evoke– social network game “10 week crash course in saving the world”
·     Phonestory – an educational app that shows the dark side off where your phone came from
·     FeeRice – Play to help world hunger

He also discussed sport and our emotions in sport – territorial control, attachment to a team, triumphs, despair, confidence, and anxiety. He showed some Photography by Newsha Tavakolian that emphasise sport emotion. 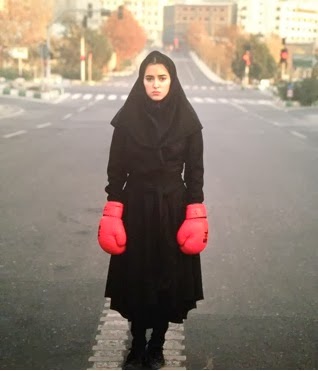 There was a lively discussion after his talk and lots of focus on the gaming side of his talk. It was pointed out that there is a big “generation of gamers at the moment that we need to tap into”. There was also a quite amusing heated debate about the game ‘Candy Crush’, one group member was discussing how her teenage son wastes so much time on the game, another group member fired back that she doesn’t see why it is a problem for people to play Candy Crush if they want too, especially on a tube journeys where time is wasted anyway and she felt that sometimes games are a good tool to disconnect us from ourselves and society.
Sunday lunch
Ceri Buckmaster gave an ace talk about foraging and writing her book “Street Food”. She worked closely with different communities in London, foraging and experimenting with cooking together and coming up with recipes in outdoor public spaces. 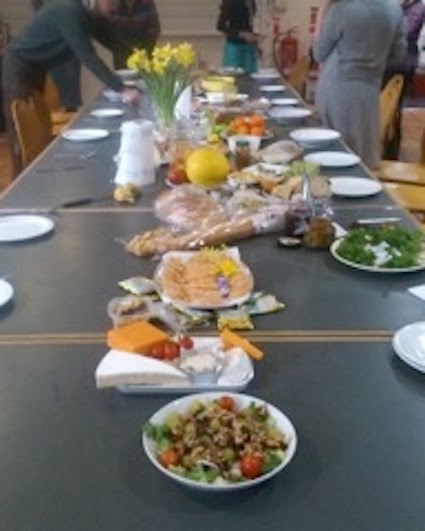 One of the recipes was Ginger and Nettle beer which she developed with a group of young children. These children then sold bottles of the drink they made in a local shop, earning them some pocket money for the summer holidays.We had some playful discussions after this where we kept swapping partners and working in small groups to discuss different questions about our relationships with food.

This was followed by lunch! And we decided to make the effort and all eat together around the tables that we could find in the room, and collect flowers from the garden to decorate the table. There was a great variety of fresh salads and sauces home-made and home grown, brought by different members of the group – Particularly impressive was the Pumpkin Tapioca grown from 18th generations seeds that the Shumei group brought with them! Very good Sunday lunch indeed!
Celia Spouncer-GreenVeins
“Food has its own life and spirit, it connects us, it is the spirit of the community and relationship building.”
Celia Spouncer was a pleasure to meet, and listen to her many stories of her interesting career. She is an Ecologist and Landscape Architect and has also done a recent MA in Art in Public – combining ecology, landscape architecture, art and local food programmes.

A project of hers that particularly stood out to me was her “Awakening the Narrows” project in Portaferry In Northern Ireland. A building that was once a vibrant hotel was left derelict, vandalised and boarded up for 6 years. This wasted resource for Portaferry has been transformed by Celia into a once again thriving community space. It serves as a boutique guesthouse, centre for local food, holds a variety of events and classes including cheese making – in the micro-dairy, also supports eco-tourism, living skills, music, the arts, ecology and local food producers.

The event was a really interesting idea and provided a lot of space for networking and links making.  For those interested  Orla has set up her own art project/social experiment based around play, called Play Spaces 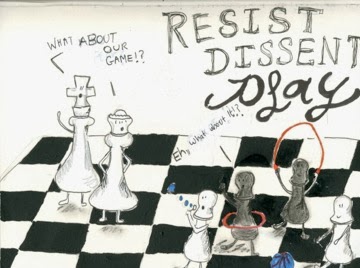