When Students Are The Teachers – Shakers are the Facilitators: Power Sharing

“Education as Freedom.
Through dialogue,
the teacher-of-the-students and the students-of-the-teacher (terminology)
ceases to exist and a new term emerges:
teacher-student with students-teachers…
The students — no longer docile listeners —
are now critical co-investigators in dialogue with the teacher.”
– Paulo Friere
Shake! Mission Statement, Item No.4
To unite the energy of artistic generations
to creatively campaign on issues of race,
power, environment and injustice
I was very happy to finally have Shake! ‘s first ever Youth Led professional training session happen. And what a success it was. Previous Shake participants Adam Cooper, Khadiza Shahid and Selina Nwulu delivered their sessions with confidence, packed full of useful information and provocations for in-depth discussion.

What is important about these sessions is that those who attended were professional mentors, educators and facilitators who came along to hear what causes these young people are actively engaged in, why they chose them and how they, as the next  generation of activist, can inform the attendees understanding of the subject and their working practice.

Adam gave us amazing insight into our rights as citizens and as a young person when it comes to police stop and search. “Its about power, not so much about getting guns and knives off the street…just remember there is always a mirror question to the one the police ask you, so you can take back your power. For example, ‘What’s your name? I’m not obliged to answer that, but what’s your police number? Where do you live? I’m not obliged to answer that but what’s your station?… And it is 100% legal to record the stop and search. Record directly on to Ustream and it’s recorded online so can’t be deleted, even if they confiscated or smashed  phone.”
Very very useful stuff. 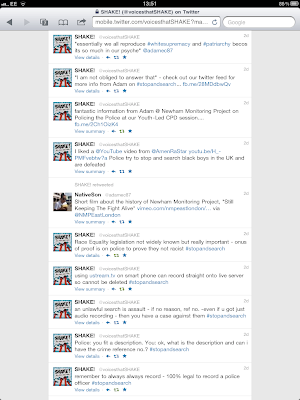 Khadiza’s workshop on human trafficking challenged how we might view human trafficking. Definitions and how procedures define someone who is trafficked are much more multi- layered than many participants first thought.
Internal trafficking in the UK, re-trafficking after escaping forced labour or sexual exploitation, and family or domestic scenarios have very rigorous procedures for qualification. Khadiza’s workshop activity had the group assessing a semi- true to life case she has dealt with, to see how participants interacted with the story of a trafficked person. It was a taster for what professionals on the front lime of tackling human trafficking experience every day. It was an eye opening session. 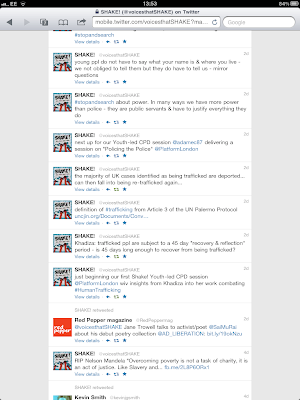 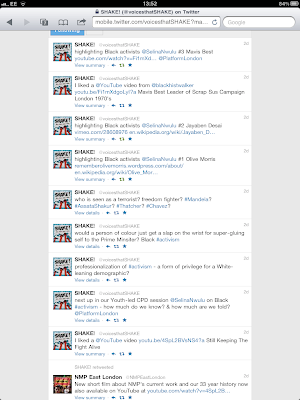 Selina’s session on Black Activism provoked much debate that fed into the previous sessions citing three female activists of colour in the UK, reminding us of the continuity of black activism and how often it is led by women –
Jayaben Desai (Trade Unionist  and strike leader for better pay for immigrant women workers); Olive Morris (feminist, Black nationalist and Squatters Rights Campaigner, founding member of the Organisation of Women of African and Asian Descent, the OWAAD) and Mavis Best (began the successful Scrap SUS campaign against police stop and search law in the seventies which saw many officers abused mainly targeting black youth. A similar SUS law was reintroduced  in 2009/10 and is a throw back to the seventies SUS law with similar tensions of targeting minority groups of youths. Which brought us full circle to Adams session.

What I found most interesting about these sessions was that they fulfilled Shake’s committed to enter real debate about race, the resonance of colonalisation, how we view race and privilege today and the “European conceived intellectual universe” (Dr John Henry Clark ) in which we exist when we have dialogue around power. The session began to normalize  what is still a taboo subject but in a progressive way that is most apparent when young people talk about race and power.  An inter-generational way of thinking and working as artist activists gets the benefits of all brilliant and politically engaged minds regardless of age, gender, race, sexuality or religious belief.

The whole evening was infused with a sense of keen interest and learning, while  the diverse levels of expertise in the room meant essential questions  were asked AND answered,  prompts  for further research were inspired and methods of creative and working practice were challenged,  as new insight to how we all work as educators were revealed.