This poetic documentary set out to explore issues of aspirations, social cohesion, capitalism, gentrification, and the UK’s growing economic divide, as identified by the young film makers.

The second Shake! film of the year was made by:

It was devised in a day, shot over 2 days and edited in 3 days by young participants of the August 2013 workshops at the Bernie Grant Art Centre. The film making was facilitated and supported by film makers Richard York and Hannan Majid The Rainbow Collective and Derek Richards from Hi8us South.  This arresting film is testament to all their incredible talent. 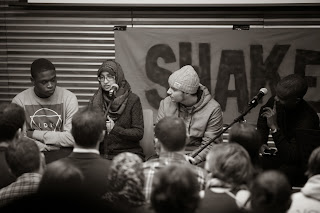 Film Makers Q & A
The film was so sophisticated. Stunning. – Jane
The film was absolutely incredible– Audience member from Shake Showcase
“Very sophisticated touches, the juxtaposition of the ticker tape of share prices and the fingerprinting news story, could easily have been missed, but matched the larger image of the HSBC building towering over the estates. Great film.”– Sarah