Ed Lewis is part of the Shake! team, focusing in particular on political education. Here discusses the significance of the project for him and reflects on the most recent Shake! course, held at the Stephen Lawrence Centre this February. 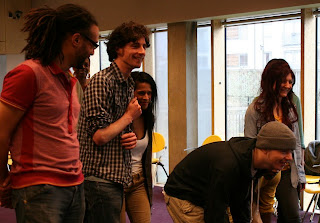 I spend most of the working week as a teacher in a secondary school. I experience the pressures, challenges and limitations of working in compulsory education, as well as the rewards and pleasures that can come from doing so. Experiencing Shake! alongside my working life has been hugely interesting. Schooling can encourage teachers to have a restricted view of the capacities of young people – when their engagement is limited and their answers are one word long, cynicism can easily develop. Some teachers, myself included, are also disappointed when they encounter many of their students approaching their education in a fairly narrow way, seeing it ultimately as an economic investment, and the value of time in class to be judged in terms of how it will contribute to their exam results (there is a tendency for teachers to see things in these narrow terms too). There are a range of reasons why this is the case, but part of the answer is to be found in education itself. An obvious but too easily forgotten fact is that the content of formal education is overwhelmingly externally imposed – students are not encouraged to pursue their own interests, to develop intrinsic motivation around learning. And the mechanics of schooling – such as the relentless focus on target grades – and the rhetoric employed – such as the use of sports-style aspirational language – encourage the investment-oriented outlook of students.

So my first experience of Shake!, back in 2010, was a liberation. In a context devoted to thinking, learning and exploring in its own right, defined in many ways by the participants themselves, fusing political inquiry with creative activity, I saw an energy and engagement from several of my own students that I hadn’t encountered before. As an educator, it was a release to have the freedom to discuss and explore ideas without the confines of a highly prescribed curriculum. What’s more, I felt that I was able to utilise my skills – for all its problems, formal schooling does equip one with some valuable knowledge and capacities – in the service of critical political education in a way that is very difficult to achieve in school.  I’ve worked on Shake! ever since, buoyed by the energy of that week, and looked forward to re-launching the project, which we finally did this February (not that things were quiet in the interim – we did loads!).

So how was it to run another Shake! intensive course, two and a half years since that first moment? It was reminiscent in many very good ways. Once again, we brought together a really varied mix of people, but by the end of the week I could sense a definite feeling of comradeship and solidarity among the group. As before, many individuals on the course clearly found it a very powerful experience – one said that it had ‘completely changed [her] life’. This reminded me of a student of mine from 2010 who said Shake! was ‘the best thing [she’d] ever done’.  And it was again exciting to see the fusion of politics and creativity, culminating in some very strong work.

Things have also changed. Most relevant to my role in Shake!, in response to feedback from last time there was more space devoted to explicitly political discussion this time. We explored a wider range of issues, including the exploitation of the tar sands in Canada, the politics of artist interventions against the oil industry, histories of anti-racist campaigning in London and questions about media and power. There were also new faces at the core of the week, including Sam Liebmann and Derek Richards from Hi8us Films, who combine a deep understanding of film with real political passion, and the incredible Farzana Khan who has become the fantastic new coordinator of the project (taking over from the equally incredible Jane Trowell).

Looking forward we can see ways of improving the intensive course further, and to developing our continuity programme more. There are interesting plans afoot. Watch this space!