Hello! My name is Saara and I’m going to be helping with the continuity workshops at Shake! Particularly with the monthly film screenings. I am really excited to get involved and learn from everybody!  I recently graduated from Leeds Uni in International Development and Spanish and am now a freelance journalist and learning to make my own documentary films. I think the film screenings will be a great opportunity to get together and share ideas, whilst also getting the chance to see really interesting films.  I look forward to meeting you all 🙂 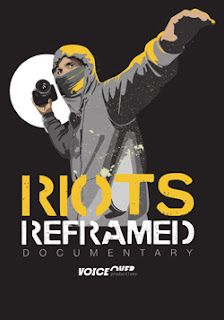 Here is a review I wrote of Riots Reframed by Fahim Alam. We watched this as part of the Shake! continuity program at Platform.
Riots Reframed demonstrates the power of documentary in its true form. Raw and intelligent, it challenges the superficial mainstream analysis of the 2011 riots. We were told that a swathe of ‘mindless criminals’ took to the streets, a bunch of dangerous rebels running wild without a cause. Mainstream coverage created the impression that we as a society should point the finger at these young rioters, and that they alone should be blamed for what happened that August.
For example, Greater Manchester Police’s ACC Garry Shewan told the BBC:  “Hundreds and hundreds of people, we have your image, we have your face, we have your acts of wanton criminality on film. We are coming for you…”
Familiar discourses of ‘us’ versus ‘them’, ‘good’ versus ‘evil’ were spelled out. With no explanation of why the riots started, what motives people had, or simply how those involved felt, a sub-group of society were singled out as being the number one malicious threat to society. Certain fears and prejudice surrounding race and class were rekindled and given ammunition.
Riots Reframed speaks out against this propaganda and situates the 2011 riots in a context of societal failure.  How could the riots have  been mindless, Lowkey points out in the film “No human being is mindless, we all have a mind, we all have a brain, no one does things for absolutely no reason, and everything is political, absolutely everything”.
Drawing on interviews from a range of experts from different disciplines, such as Akala, Lowkey, professor Paul Gilroy, poet Zena Edwards, Lee Jasper and human rights lawyer, Imran Khan, Riots reframed creates a platform where a nuanced and in-depth analysis of what actually took place and why can be discussed.   In also interviewing young people who were themselves involved in the riots, the documentary acts as a conduit through which those stigmatized and accused for what happened can speak out.
Riots Reframed cites a number of interwoven root causes of the 2011 riots which include: consumer culture, where what you own and what you buy are considered “the height of human experience”, alienation and lack of identity, institutional racism such as the education, justice and prison systems, and the militaristic “might is right” attitude emblematic of our government
The documentary is full of powerful and insightful comments which turn a critical eye to our society, government and institutions. For example, Akala explains that ‘get rich or die tryin’ is the slogan embedded in British politics, and that this attitude filters down psychologically to all levels of society. “Maybe if we go even a decade without bombing a country our pretence for being a force for moral good might have a degree of credibility” but until then, young people are taught by British politics that if you want something, you take it.
DJ Steaz explains that in some ways the riots are an assertion of power. “It was like people on the streets saying we have power, you don’t recognise our power, you don’t listen to us, but in different ways within the system we live in, we can assert this power…”
Fahim Alam uses the 2011 riots as a keyhole event through which to open up a wider and deeper discussion about structural failures within British society. When you watch this film, you can’t help but feel angry, frustrated, excited and passionate all at the same time. It leaves you wanting to know more, talk to people, create things and make connections. In this way, Riots Reframed provides a space of opportunity, in which we are able to learn not only about the 2011 riots but about our society as a whole, and most importantly, build on what we have learnt and move forward charged with new knowledge and new ideas.
If you have any comments or questions you can tweet Saara  @saarajr