Reframing the ‘Riots’ – Voices of the Unheard 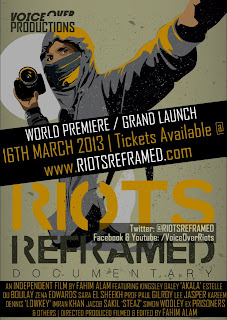 We’re excited about the premier of a new feature-length documentary in London today – Riots Reframed takes a look back at the 2011 UK uprising in London and reframes the mainstream media narratives of “feral youth” through voices of resistance, dramatic monologue and raw spoken word.

Film-maker Fahim Alam is keen to “emphasise the ‘positive’ fallout of the riots… in the aftermath, some people began talking about a section of the population that for years had been ignored helping to strip away the veil of normality that concealed entrenched social despair... Sometimes there are deep and profound opportunities within the biggest injustices and if we can use these things to speak to power then we should.” [New film reveals the unheard voices of the 2011 London riots, The Guardian12/03/13]

Our event, The Unheard: Youth, the “Riots”, and the Media that took place at the Rebellious Media Conference in 2011 discussed similar issues of youth mis-representation in the corporate media in the aftermath of the ‘riots’. Here’s part 1 of that event below. Part 2 as well as interviews and poetry from Selina and Rotimi plus Ceasefire magazine interviews with Zena and Sai from the conference can be viewed on our videos page here:

The premiere of Riots Reframed also features a Q+A audience discussion (Akala, Prof. Paul Gilroy, Lee Jasper & our very own Zena amongst the panel). Tickets may still be available from here.
See you there!