Umaru- Day 1 and 2 at Shake! intesive 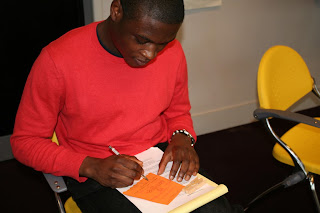 We were told on day one of the course that during the week we would have an opportunity to explore what art forms we most wanted to do and could either do Film or Spoken Word.  We had a day to think about it and I was mulling over what I would do but in the back of my mind I was eager to explore spoken word, as I had already started writing abit at home, so spoken word it was then!
So after lunch on day two we were in the main space downstairs ready to get stuck into spoken word and were asked by Zena to think about why we chose spoken word and how through writing poetry we can make our personal story political.  She showed us a Def Jam video of Patricia Smith’s performing “Skin head” and we unpacked the devices she used in her performance, how she spoke with the voice of her character, how she made the personal political and how she used humour and empathy to relate to her audience. 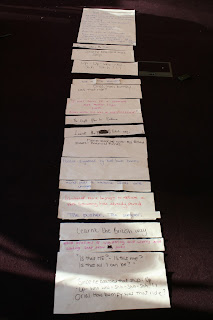 Then it was our turn.  Sai briefed us on how we were going to write a poem called “I am” based on our lives, our friends, family all the things which make us up as a human being.  But our task was how we could make the personal political, how our personal narrative story could also be a political narrative. Some of the devices we used to get into the zone was to start each line with “Iam” and to be as descriptive as you can but also remembering the devices Patricia Smith used like using her voice as her character and think about what are the boxes that society wants us to conform to using race, gender, age, background and how we can reverse those stereotypes.  We took 5 minutes to write and then shared our pieces to each other.
Sai then shared his experience of working with the Leeds Young authors and how he created a group piece based on the theme “I come from.”  Then it was our turn to try and do the same, by picking out the strongest lines in our poems and writing them down on massive paper to see how we could create a flowing story that was about where we came from.  Our poems touched on themes from our ancestry, identity, where we reside and using our own mother tongue to create one story.
The process of making it one was challenging but fun, as everyone’s lines were on the floor we had to think about what made sense and what easily flowed and created a narrative as some lines were sounds and memories whilst others were a specific characters story.  So there was a lot of chopping and changing but we managed to create our final piece which case titled – “Neat Suitcase, The Sword”
DAY TWO
After creating a group piece the focus changed into producing our own material to perform for the internal show case.  In order to direct our attention we were given different poetic strategies to create our own work.  These included, an Acronym poem which basically is using the first letter of each word to tell a story, rhyming couplets (ABABABC) at the end of each line to create a tighter poem.  We were also given worksheets to aid us in our descriptions of our poems and to also be as specific as possible through our description of our poems.
The time we had was focused on trying to create our own material so much of the time we spent was on our own, in our own zone trying to create new material.  The material we created was still based on the themes of ancestry, identity and also making the personal political some of our work was also inspired by the workshop session we had on the role of the media in telling stories.
Using the knowledge we gained from how the media use images and headlines to tell stories and how many of the media’s stories alienates its readers. We also learnt the media has power through its editorial choice to twist a story or portray a story which it wants and which is overtly different from the truth. 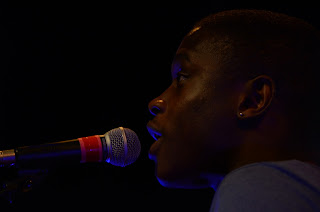 So we used the inspiration of the workshop to create our own work and I found once the learning was in place writing my material came more easily.  I was able to create work without thinking too much but being generally in the zone to try new formats out and share them with group to get their feedback on the work.  So once our time was up it time to share our work and choose our strongest pieces for the internal showcase.