Well, we seemed to have totally hit the spot on Sunday with our session “The Unheard: Youth, the ‘riots’ and the media” at Rebellious Media Conference. 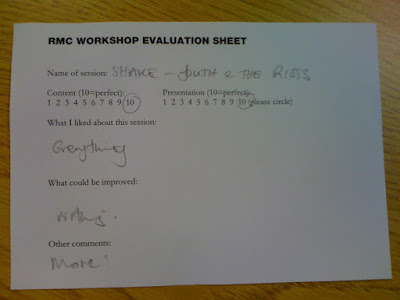 + here’s one of many praising tweets, and an extract from same person on a blog review of the conference:

…On Sunday I went to the forum on alternative voices from ‘the riots’ this was a focused and well organised session; probably worthy of the trip in itself.  A number of young people talked about their experiences of the riots, their interpretations of mainstream media as well as their analysis of the causes.  They expressed themselves in a variety of ways, including using video and poetry.  This was the ‘rebellious media’ I was looking for, not mirroring the current inadequacies but finding common ground with others and allowing their own expression to be the media.  Concerns of those close to events were raised, not mediated through some elite journalist with a decontextualised catchphrase. This is what a radical media conference should look like as voices from the heart of relevant issues command centre stage while networking and organising follow…