The Bus is launched in Tottenham!

On Tottenham Civic Day, 25th June, the day dawned damp. But we needn’t have worried. The weather held and a good crowd enjoyed the full programme of outdoor performances, creative artists’ stalls, and delicious barbecue that was laid on by the great staff at Bernie Grant Arts Centre

The Centre is the new home for PLATFORM’s spectacular life-sized steel Bus, the Living Memorial to Ken Saro-Wiwa by Sokari Douglas Camp, which was launched at 1pm that day.

Two musicians playing talking drums led people to the Bus from the courtyard.  John Baraldi, the Centre’s Chief Executive introduced the event, and there were speeches by the artist Sokari Douglas Camp, Ben Amunwa (Platform’s Nigeria campaigner), local Friends of the Earth activists, and very movingly, Maria Saro-Wiwa, Ken’s widow. Shake’s very own Zena Edwards read her achingly beautiful “Photo of a Girl”, inspired by a photograph taken in a village criss-crossed with pipelines in the Niger Delta by Ed Kashi. The speeches ended with Bruce Grove councillor Joseph Ejiofor, and an amazing performance on the Bus’s rooftop barrels by Bawren Tavaziva, Artistic Director of Tavaziva Dance Company which is based at the Centre. 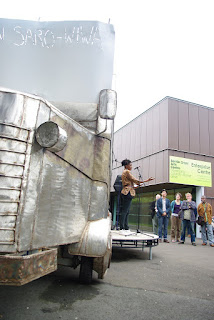 It was fantastic to see Jonathan from Shake! 2010 there. He’d come up from Lewisham with his parents and it was a great reunion for us. Jonathan came into Platform three days later to look at materials on Nigeria for some art projects he’s developing. We’re looking forward to working closely with Bernie Grant Arts Centre and artists-activists in the area during the next months, especially creating a Shake! course there, tailored for Tottenham…