Review of the big Shake! Preview

On the evening of the 26th February, the Albany in Deptford hosted the Shake! preview – an inspirational night of poetry, music and the sharing of experiences of contemporary issues across generations. Hosted by Shake’s very own multi-talented Rotimi Skyers, accompanied by ground-breaking facilitator/poet/performer/all round awesome person, Simon Murray, the night successfully shared the message, aims and work of Shake! with the wider community. 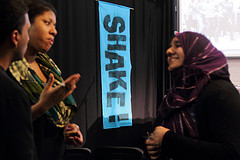 Building up to the preview, the participants and facilitators of Shake! worked on developing and strengthening their shared understanding of the project. The new mission statement was shown on the night, stating that, fundamentally, Shake! ‘is the realisation of Art as a tool for change and a celebration of youth voices.’ Click here to see the whole statement and view groovy Eric Soul’s guerrilla style filming of the first draft.

We were honoured to have Doreen Lawrence open the evening with some warn and inspirational words. The evening saw the first public showing of the first Shake! film, leaving the audience both excited and inspired. A couple of our own poets performed poems that had been written as a result of Shake! in August. Selina and Rotimi delivered very moving poems based on the story of Stephen Lawrence, which was a predominant theme in the programme over the summer. Kavi, who worked largely in filming over the summer, performed an awesome, thought-provoking poem inspired by student revolts and rebellion across the middle east, entitled: A Protestor’s Shopping List. Click here to read it. Similarly, Nuha who also worked with film and did not perceive herself to be a poet, stunned the audience with a poem written in Arabic and translated into English. 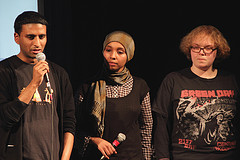 Ben of Platform gave a brief update on his latest trip to Nigeria. The story of Ken Sarowiwa ran through Shake! in the summer, and Ben’s experience, knowledge and passion was an inspiration to all Shakers. We were also joined by a speaker from the UpRise Anti-racist festival and Rose-Anne Gush, a Fine Arts student from Goldsmiths University, who played a large role in student occupations across London.

The evening was most definitely a massive success, and now we move in with optimism as we develop future Shake! plans. The response of Peter, a trustee of Platform and former campaign of Friends of the Earth shows just why we feel so positive: “The evening – the project – was an expression of love, it can’t get better than that.”