HANNAH REVIEWS “THE DECLARATION” and “THE RESISTANCE” by Gemma Malley 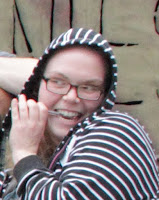 On the second day of SHAKE! we asked the participants to bring to the session something they considered to be a piece art that had Activist connotations. Hannah Brought in the The “Resistance”, part of the The Declaration Trilogy by Gemma Malley. Set in the future in a time when human being has found the  means to live forever! However, they had not considered the consequences of this, socially, politically or psychologically. We asked Hannah to right a review.
So in Hanna’s own words…
THE DECLARATION: BOOK ONE 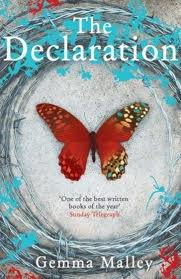 A guilt trip when you think about it. Our generation quests for eternal life, and we dare not think of the consequences. This book braves this taboo territory and explores the year 2140. The world is, literally, failing to support the immense population. There’s little fuel, little food and little countryside. There is also very little crime, very few terrorist threats (unless you count those performed by the ‘Underground’ and groups vying for cheaper ‘Longevity’ drugs). What of families? Well, any parents who decided not to take Longevity are… dead. When you take Longevity, you forfeit the right to have children. Any children you may bear may be found and will be forced into either: slave labour or ‘consensual’ labour’, raised to hate you and themselves.
The protagonist is Anna, a stubborn girl who is determined to ‘Earn Her Place’. Life is looking up for her: she doesn’t know her parents, she’s a Prefect, her Work is usually Excellent or Perfect, and she’s nearly sixteen which means that she will be a Valuable Asset and will soon be working in a House on the Outside.
Then along comes Peter, a boy who doesn’t Know His Place. His mischievousness, cheekiness and Outside Knowledge drive Anna to think differently about her Place and whether or not her parents do actually love her.
It’s quite an interesting read, and it challenges you to think about the consequences of our actions now. There’s very little mention of race, although it can be assumed that everyone is white because the adult characters appear to be far more nationalistic than we are ‘today’. Power is quite obvious- the adults have it all. One man, in particular, has a lot of it: Richard Pincent.
Stars out of five? Four. 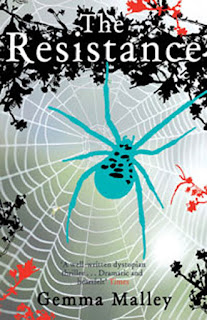 The second book of the Declaration trilogy. It’s a slow burner, and quite predictable. The protagonist has switched to Peter so that you find out more about him because, in the first book, he was this mysterious character with an aura of wonder. In this book, you just want to cuddle him. He’s harder, but he’s easily led. We’re also introduced to Jude- Peter’s half-brother. I like Jude. He doesn’t take crap from anyone and is his own man. He’s cool like that. We also get to know Richard Pincent, the man with all the power. He owns the company- Pincent Pharma- which produces Longevity drugs. Nice one, Richie! Or so it would seem, because he is really the most ‘Selfish’ character. He leads Peter to believe everything he says, nearly forces Anna to sign her Declaration, and locks away Jude :'( The Underground are far more active, which is a good sign because Pip was also one of my favourite characters. He reminded me of one of my teachers- if any of you know Mr. Bolton, you’ll probably like Pip as well- and I don’t know what that says about me, but whatever.
Predictable, gets you where you’re going and has a beautiful climax. Almost like going on a business trip to a beautiful island.
Stars out of five? Three and a half.
The Legacy:
The final installment of the Declaration trilogy. Set one year on from The Resistance, the world is rapidly running low on energy, food and water with ridiculous rationing schemes having to be enforced. To make matters worse: a deadly virus is sweeping the country. Richard Pincent, the head of Pincent Pharma we met in The Declaration and got to know in The Resistance, knows this but withholds the information, blaming the Underground for the mounting bodies. Peter- in Scotland with Anna, their daughter Molly and Anna’s brother Ben- travels to London after receiving a message that he is needed only to discover that Pip, the lovable leader of the Underground, has turned himself in. In a race against time (and a few grammatical errors along the way, which were annoying and distracting from the story) Peter, Jude, Anna, and newly-free Sheila  fight to save the children from riots and attacks on their lives, and make a startling discovery that draws the perfect end to the trilogy.
Stars out of five? Four and a half.